It's been a year, but I'm finally back! Yesterday I walked in my 7th half. It was the 3rd time I've done the Soaring Wings and it was the last half I did.  It's been such a long, difficult road from then to now.

After my last half, I had such big plans. I was going to rack up a total of 13 half marathons before my 40th birthday. But things just fell apart. I canceled our trip that would let me do the New Years Double, which made it impossible to hit 13.  Even then, I decided instead to do virtual races. One a month unless I had a "real" race. I did one in January. So I guess technically this was my 8th, but I have a hard time counting that one because my time was horrid and it just wasn't the same as a "real" race.

In February, I discovered my diabetes was out of control and that was making me feel just awful. Constant fatigue. I could barely get out of bed to go to work, let alone walk a half marathon. It took months for me to get that under control.  When I was put on insulin, I was terrified of walking long distances.  Would my blood sugar drop unexpectedly in the middle of a walk?  It took me a while to get used to it all and convince myself that I'd be OK.

And then my Dad died.  I had always expected that to be a huge explosion in my life.  A sudden black hole.  But it wasn't like that.  It was slower, and it took me a while to see how the grief was dragging me down. I've struggled with depression more than I have in a while. I started walking again to have time by myself. I didn't want my kids to see how much I was hurting. Walking honestly became my sanity.  It was months before I could take a walk and not cry.  I still do from time to time. But walking became my therapy. I need to do it as much for my head as my body.  Maybe more.

By July, I had gotten over my fear of passing out by myself on the trails and I did a 5k with my sister.  I remembered how much I love races, so I started thinking about signing up for the half-marathon.  I gradually increased my mileage until I was certain I could keep my blood sugar controlled for 13.1 miles.  And I registered.

It's been a very dry summer here.  Our swamp behind the house has been so dry that we actually walked to the end of our property for the first time.  It was bizarre, but that's another story.  But, of course, you know what that means....

Rain!  My first half-marathon in a year and it's forecasted to rain all day long.  It's hard to really complain when we desperately need the rain, but I really wasn't looking forward to it.

I didn't have much of a goal for the race, other than to finish.  I've been incredibly slow this summer, barely able to break a 18 minute mile.  Since they added a full marathon this year, I really didn't have a time limit, but I didn't want a 4 hour half-marathon.  I honestly thought that was what I was looking at.  My longest time to date was 3:45 (my first Soaring Wings in 2013).  If I had a goal at all, I wanted to beat that. 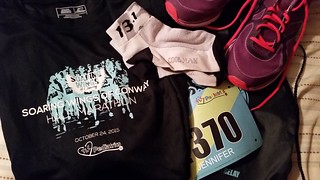 The rain wasn't too bad, really.  Drizzle now and then, but never a downpour.  Enough for my socks to get wet, though.  I've always had a problem with blisters every time I've done this race, even if I never get a blister once during training, I end up with crazy blisters at the race.  Around mile 9, I could tell my socks were wet and had some hot spots coming up on the ball of my right foot and I resigned myself to having torn up feet.  What else could I do?

I was pretty impressed with my pace the first few miles, and worked really hard at trying to keep that pace the whole time.  For some bizarre reason, I had 16:23 stuck in my head as my pace for my last PR, and I was going 16:00-16:10.  I was so excited.  What are the chances I could PR my first race back?

My official time was 3:36.  Not a PR, obviously, but still no where near my worst. I am impressed, really. I had all but given up on racing and I had a very good race. That really means so much to me.  I feel very fortunate to be able to do this and I don't want to ever take it for granted.

After I crossed the finish, I grabbed some pizza and water and found a curb to sit on.  I couldn't eat the pizza.  I seem to have a very hard time making myself eat after a race, even though I need to.  As I was trying to eat, I looked down at my feet and notice a red stain on the side of my shoe. (My shoes are SO PURPLE. I'm not really a purple kind of girl.  Selection is limited when you have huge feet, though) I thought back through all the stations along the race, and didn't recall any having red Gatorade.  So what was that stain? 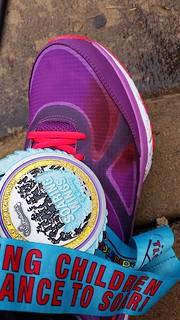 I went to the first aid tent before I took my shoe off, just in case.  My pinky toe was all bloody, but with all the blood, I couldn't really determine why.  I got a bandaid so I could at least get my shoe back on to walk to the van where I had dry socks.  I drove home shoeless.  It turned out to be a small blister on my pinky toe. I guess the rain made it look a lot worse than it probably was.  It was also the only blister I had. I was so sure my right foot was going to be so bad.  But nothing.  Except the dramatic bloody blister on my pinky toe, of course.

I don't have any pictures of me for this race.  I'll be honest.... I've gained about 30 lbs this year and I am not comfortable with that AT ALL.  I hate pictures right now. I have seen the race pictures, and saved a screen shot of one that I want to compare my next race to.  I am not sure exactly when my next race is, but I want to have lost some of that by then.

I am planning on doing a 10K/Half-marathon combo in March (10K one day, Half the next) for the Little Rock Marathon.  The past 2 years, I have signed up for the CASA half marathon in December, but have yet to actually do the race.  I'm torn between actually doing it this year, or just admitting that that isn't a good time of year for me and waiting until March.  Bill and I are discussing a "destination" race in April (it's not THAT far away, just a bit too far to not stay overnight), and I want to do RussVegas again because that's been my favorite to date.