The One In The Middle

Isabelle's birthday was way back in April, but I just finished her birthday present today. Bad Momma. My plan was to give her a copy of Judy Blume's book The One In The Middle Is A Green Kangaroo along with a green kangaroo. Because she's my green kangaroo.... my middle child. I didn't finish the doll in time, and then it hibernated half-finished while I dealt with the house fiasco. She finally reminded me with a sad little "Is my kangaroo finished? My birthday was a long time ago."  =(

But it is finally done!

This is not my design. It's a Lalylala pattern,  Kira.  She has a collection of similar adorable patterns. It's supposed to have a baby kangaroo in the pouch but I figure that would end up lost.

Not much else to report yet. Probable new house on the horizon, but I don't want to talk about it just yet. I'm ready to get out of here though. Looking at bigger houses makes this one feel so small. Because it is. =)

I appreciate those of you who still read me despite my slacking on updating!

Have a great weekend! 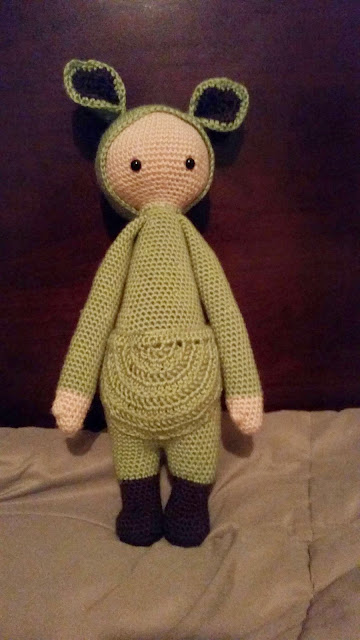 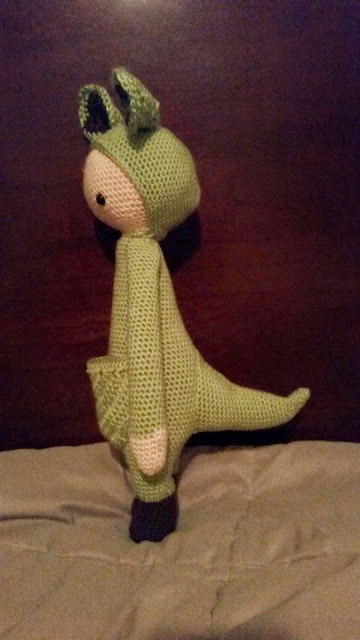 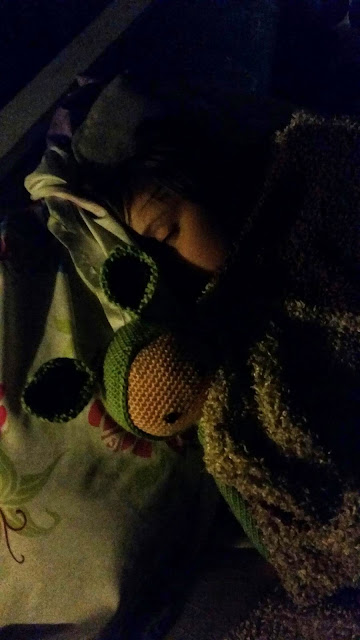 Well, that was fun.

Long story short... that dream house?  It turned into a nightmare. The deal fell through, and the process had been so awful we were relieved instead of disappointed.

Usually, you never actually deal with the owner selling a house. But the owner of this house insisted on being around all the time. I thought she was fine the first time we met her, but she turned into over of the most unpleasant people I have ever met.

Our first bump in the road was the fact that the house was actually a manufactured home. It was so well maintained and had been remodeled to the point that you really wouldn't know if no one told you. Nice or not... most mortgage companies don't finance them. Period. Including the one we were pre-approved through. So we had to scramble to find someone who would. We eventually did but the requirements for financing manufactured homes are much stricter. Our "sure thing" turned into iffy.

We had to endure fits from the seller.  We had decided to self-inspect, because the VA would do their own inspection and appraisal. We were basically thrown off the property and told we had to have a licensed inspector or the deal was off. My agent said she couldn't actually do that but not wanting to cause problems, we did pay for an inspection. We tried to be very accommodating. We changed the closing date to make things easier for her to arrange her own move.  She asked us to take her dog, and we agreed as long as Isabelle could meet him but we were not allowed to bring the kids on the property.

She was awful. My agent told her agent we would not come back to the house without her agent present.

After weeks of dealing with the loan officer from Hell, we were finally told they would not approve the loan.

I do feel bad. Yes, she was a mean cranky woman but I don't believe that bad people deserve bad things.  She was in the process of planning a move to England, so I'm sure this is far more inconvenient than it would be for most people. That's not my fault and we tried EVERYTHING to make the loan work. My agent assures me there isn't anything the woman can do to us, but even she is somewhat concerned that the woman would try. We still haven't gotten the signed termination of contract back, either. I do wish I could just write it off to her bad karma and forget about it.

So we begin again. We can't make any offers until the termination is final, but we're starting the hunt again. A huge part of me doesn't want to. The past few months have been incredibly stressful and I don't want to go through it again. But we have to get into a bigger home. I feel so crowded and it's not going to get better. That is stressful in itself.  But it's tempting to put it off all the same.  Last time, I was always so excited to go look at houses. This time it feels like a chore.  Hopefully my attitude will improve.