Oh, summer.  Will we ever get along?  Probably not.

My Random Balls of Happiness project kind of exploded for a minute, but has calmed down since.  I'm just letting it take its own course.  It's been really interesting to see the people I connect with on Instagram, and the other projects that are out there.  There's such a huge community of people trying to spread happiness and find and point out the beauty in the world.  It's amazing.


Even though my Happy Balls are kind of like therapy for me, and I've been feeling really good for a while, the clouds rolled in not too long ago.  I had hoped it was a PMS thing, and my therapist and psychiatrist think it could be hormonal, but I'm definitely struggling.  The psychiatrist is adjusting my medications and my therapist suggested that I keep track of my moods to see if it is related to my hormones in any way.  I really need more than 2 highlighters because I should have more than "happy" and "sad", but it's more like "good" and "bad" and I'm writing what's actually going on.  I HATE adjusting my Topamax dosage.  Good grief that stuff messes me up for a few days when I have to increase it. 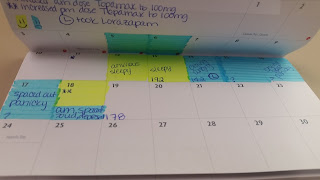 The psychiatrist also gave me Lorazepam, which honestly scares the crap out of me because it's addictive.  It's prescribed to be taken as needed, and I've only taken it once since she prescribed it. I know people abuse the stuff, and I don't know how it makes people feel when they don't have anxiety/depression, but it just made me feel calm again and eventually I fell asleep.  Like I said, the stuff makes me nervous (ironic, an anti-anxiety medication making you anxious) because I don't want to be dependent on anything.  I've never even liked strong pain killers.  Plus, it's not often I have the luxury of being able to just knock myself out to cope with not being able to deal with life.  You know what I mean?  I have kids that need to be attended to, a job that I have to work.  It's not easy to schedule a nervous breakdown.  Trust me, I've been postponing mine for years now.

I'm actually having a good day so far.  It's not even 7am, but you know, I actually have a positive outlook on the day instead of feeling like finding the nearest cave and moving in.  Hopefully I can have a nice long yellow streak on the calendar.  PMS isn't supposed to hit for another week at any rate, anyway.
Posted by Jennifer at 5:01 AM 1 comment: