So I'm feeling much more like myself lately. Which is awesome!  Work is a total 180 from a few months ago. I now work with two of the funniest ladies ever and laugh every day. Like stomach hurting kind of laughter. It's great.

Spring Break is this week and we are actually taking a real honest - to -God vacation. Not our normal cabin in a state park vacation where I still have to cook and clean the whole time!  We leave for Branson in the morning. We are staying in a resort with an indoor water park. We plan to visit the Ripley's Believe It Or Not Odditirium and The Butterfly Palace. And... I am going ziplining.  No one else wants to go but Bill said go for it. I'm terrified of heights so I'm not really sure why I want to do this so badly. LOL. I'll probably post a million pictures because I got my camera repaired and will take a billion pictures I'm sure!

After we get back, I have a half marathon April 5th. I'm going to go visit a good friend for the weekend who lives up where the race is. I'm excited about that as well. It will be #4.  April 26 (Isabelle's birthday) will be my 5th.  Having three half marathons so close together will qualify me to join Half Fanatics, and I'm stoked about that, too.

Last weekend Bill sent me a text, a picture of the December calendar.  I had no idea why he would send me that so my response was "??"  LOL  He sent back a zoomed in picture of the last week of the month where it said "Bill off" with the caption "Be ready. "  Still confused, I asked what I needed to be ready for.  He said, "Don't you have a race that week?"  I could have screamed into the phone, I was so shocked and so happy!  He took off of work for us to go to Texas so I can do the New Years Double.   A half marathon on New Years Eve.... follows by a half marathon New Years Day.   The medals are AMAZING!  It's a big challenge, obviously. But I totally have time to train.  My sister and I wanted to do it but neither of us thought our husbands would be on board for it.  But we were wrong!  I only mentioned it to Bill once, as a "it would be so cool to do this" kind of thing.  I didn't beg or nag or anything!

Needless to say, I have a lot to look forward to!

In other obsessive news, my crochet business is creeping along.  Not booming as it was at the beginning of the year but I've been steadily working on dolls.  I'm ok with that.  I have a lot of personal projects I want to do as well and it's hard to balance it all.  The business is for fun so I don't really want to be so swamped that I can't do anything else.  My mood blanket is coming along but I am really bored with it so I may be taking it a different direction come April.   I'll update more on that after I finish up March.

Hope everyone has a great week!  Look for a Spring Break post soon!
Posted by Jennifer at 9:50 AM 1 comment:

Once upon a time

Once upon a time there was a girl named Jennifer. In high school,  she had a very awesome friend named Sam. Truth be told, she had a huge crush on him. He was just everything she liked.... long hair, played guitar, funny, smart. They were best friends. One day Sam called her and told her he sometimes thought about asking her out but he didn't want to risk not being friends. Jennifer convinced him they would be friends no matter what happened. They "dated" for exactly one week. It was a little strange. During that week, Sam opened up a lot about his mother.  The note he wrote to her to break up with her told her that his mother had died a few years prior. It also said, "sometimes I think I love you and I want to tell you. " Even though he ended that phase of their relationship, Jennifer thought that was the most beautiful thing anyone had ever said to her and it remained burned into her memory for many, many years.

They did remain friends. Dating was awkward at best and they never even kissed. But they loved each other as friends.

As life went on, they lost contact.  Then they found each other again. Sam was very odd, but Sam had always been very quirky and that was one of the things Jennifer liked do much about him. Unfortunately, Jennifer had just meet Bill and devoted so much time to him that she lost touch with Sam again. She never forgot him, though. Some people are just too much a part of you to forget.

Jennifer saw Sam a few times... once walking down the road, once across a store..  always too far away for her to call to him. It was frustrating. To know someone you missed was so close, in the same part of town frequently as you, yet you had no way to talk to them. She never could find him on social media and no phone number listed since everyone these days has mobile phones (not that she could ever in a million years work up the nerve to call him if she found a number for him...).

One beautiful warm Saturday, Jennifer took her kids to Hobby Lobby. They picked up some yellow yarn and checked out. As they were leaving, Jennifer held the door for a man following behind them.  She looked at his face and realized...

Dumb with shock, she said nothing.

He said "Thank you."  And walked away.

Even amidst all the chaos in my head and life recently, I have kept up with my mood blanket. I think it's been good therapy, honestly. I have to look back on my day and be honest with myself about how I'm feeling. Some days, when I look back on the day, things weren't as bad as I felt they were in that moment.  It's been a great visual to one of my current mantras... feelings don't last forever, good or bad. You have to savor the good ones and wait it the bad ones.

The picture is my progress through March 2. I have one more section that will take me through the end of March and then I repeat the whole thing.  I actually thought about just carrying it through March and starting a different blanket because I am a little tired of the color scheme, but I think I should keep it going. We'll see how I feel at the end of March. 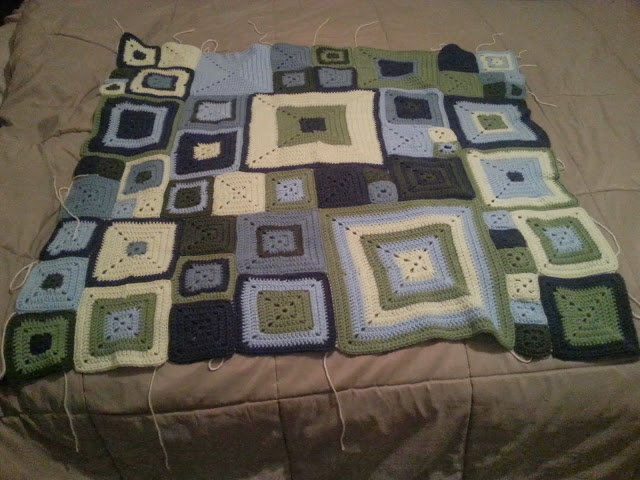 I decided I needed a good goal to keep me moving. A good long term goal. This is my plan....

I turn the big 40 on 2015.  I have decided I want to have 13 half marathon medals by then. I have 3 now and that gives me 21 months to find and complete 10 more. It will keep me in constant training mode pretty much.  The hardest part is coming up with 10 more without adding too much travel expense.

I said my next half is 4/26, but that has changed. It's actually going to be 4/5 at the Bentonville Running Festival. I have a friend that lives there that I don't see enough, so it's the perfect excuse to go visit. And she had kids around my kids ages so they can come along too. I will have the cutest cheering section at the finish line with 5 kids under 10 =)

And another exciting aspect of adding in the Bentonville half is that after RussVegas on 4/26, I will qualify for Half Fanatics!  I would love to be out on the race course rocking a HF jersey. =)

I have a REALLY crazy goal marinating for after this is completed. And I do mean crazy. My sister was telling me about a co-worker of hers whose wife WALKS the FULL marathon. She's won the walking division a few times, in fact (which implies that she may not be the only walker doing the full). I'm just in awe of her. So maybe, MAYBE, I may celebrate turning 40 by walking the full Little Rock Marathon in 2016.  Maybe =) 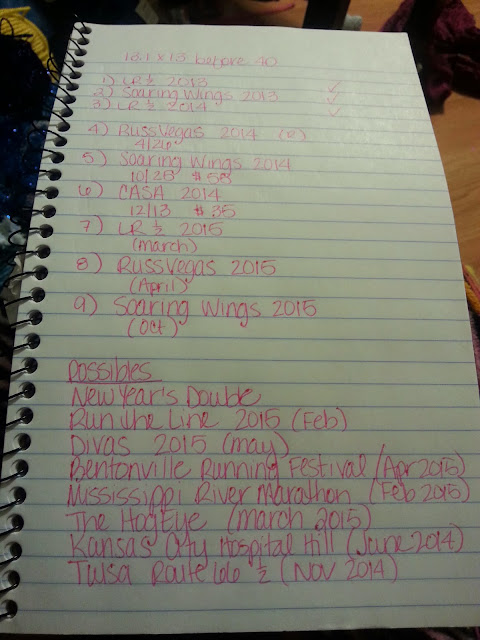 I almost didn't do it. I had spent so long in my funk just sitting on my behind that I didn't feel prepared. But, less than two weeks to go and I decided I COULD NOT quit. So I got back out there to train. I was still worried. I only made it up to 8 miles in training. But I was going to try.

The theme this year was super heroes. My original plan was Super Grover. When I asked my sister if she was dressing up, the plan changed. She was Super Grover and I was Super Gonzo. Personally I think we were the best costumes out there, hands down. =) And luckily I had the idea of using a rain poncho for capes. I think we both would have frozen to death otherwise.

The weather was a concern for days before the race. Yet another winter storm was headed our way. Good grief, I am sick of this winter. We knew it was going to rain so we looked up ways to keep our feet as dry as possible. But it was so much worse than we thought it would be.

It was so cold, barely above freezing and I am almost sure it was freezing by the end.  Windy... very windy in places. And rainy. My legs were numb. I don't think I have ever been so cold in my life. But I felt great! I would check my pace at each mile marker and I was doing way better than I thought I would. I kept my mind from thinking too far ahead, just one mile at a time. I reached 10 miles and was ecstatic. So close!

But then, just before mile 11, there was a cop redirecting us. He said there was a thunderstorm coming and they were shortening the course. Everyone was so upset. We met up with some people who hadn't been redirected and you could tell who had and hadn't been because we all looked like someone had popped our balloon at a party.

It turned out that they only shaved about a half mile off our route, which was even more irritating because it seemed so pointless... half a mile, 8 minutes at my pace...  how stupid. But I really shouldn't complain. The full marathoners were picked up on a bus and even if they refused the bus and finished, there was no one there to give them their medals. =( In fact, my sister is at the after race party and said they are just giving the medals away. (She asked if I wanted to have one and I was very torn but I want one of those huge hubcap medals so badly I said yes)

Next stop:  RussVegas Half on April 26!  I have a lofty goal but I will tell you more later about that later. 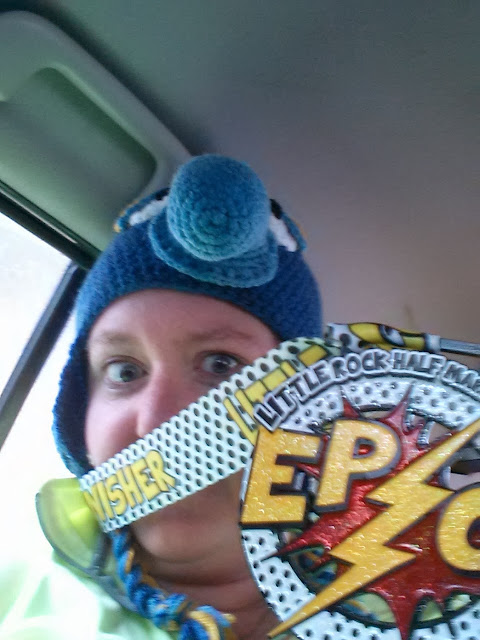 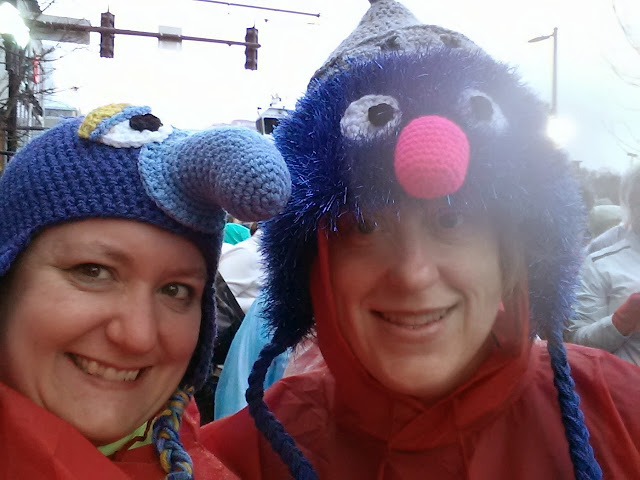 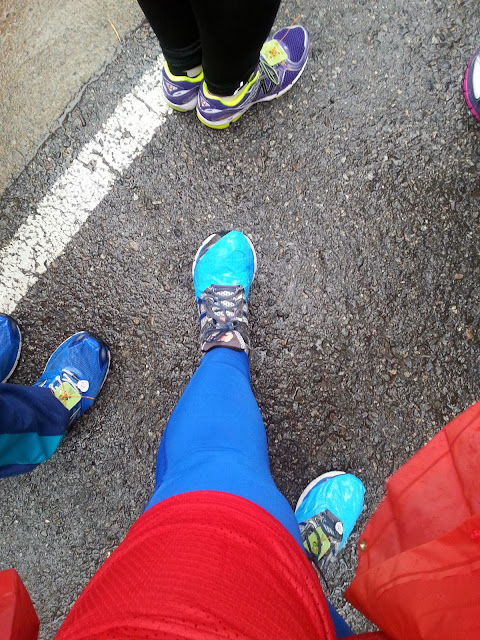 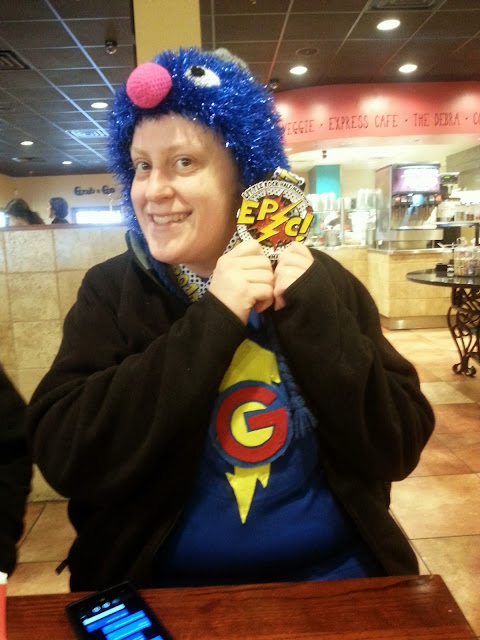 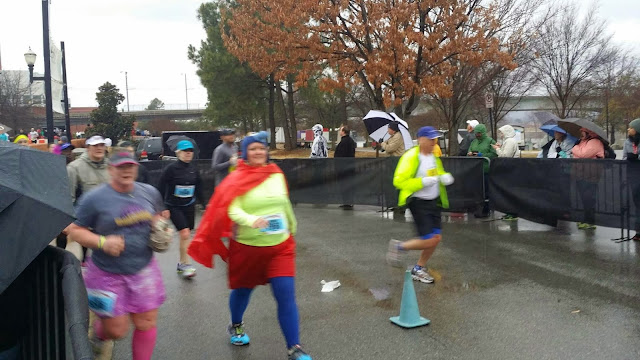