***  Thank you all for your really sweet words!  It really means a lot to me to have people who take the time to read my babbling and you guys made me feel really good!  =)  ***

I had a phone call yesterday at lunch.  I didn't recognize the number, but it looked familiar and I thought it was someone at work (I went out for lunch).  It was the pharmacist from Walgreens where I get my prescriptions.  She asked me if I had ever taken Zoloft before (yes) and how I was feeling.  I have never, ever had a pharmacist call me to ask how I was doing on a medication.  And it's not like some Mom & Pop little pharmacy where they know me or something.  It's Walgreens.  I thought that was odd, borderline concerning...  is there something I need to be looking out for?  Weird.

Anyway.  Enough about that.

A few weeks ago, my sister sent me a text asking if I wanted to go to the Bon Jovi concert with her.  There was a Groupon deal, so it was cheap ($17 or $22) and her husband was offering to babysit for me.  I haven't listened to Bon Jovi's last 5 albums or so, but I do love their old stuff, plus it was a night out.  So, of course, I'll go!

I haven't been to a concert in YEARS.  I'm not a fan of crowds.  Or live music for that matter.  But a Girls' Night Out is necessary every once in a while, especially one that doesn't involve people under 5 ft tall (unless you're under 5' but over 18, I guess I should say LOL)

I had heard on the radio that the show should start at PROMPTLY 7:30pm, no opening act, just Bon Jovi.  I also heard from other people that they only play about 4 old songs.... and other people said they play a lot of covers.  I really didn't have high expectations, but the tickets were cheap, and it was a night out, darn it.  I don't care if they sing Mary Had A Little Lamb.

The arena has two upper levels, and we thought buying the more expensive tickets meant we'd be in the lower upper level. 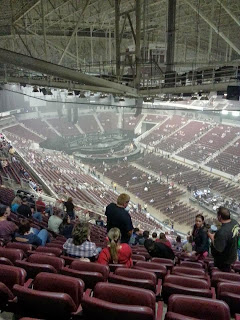 That was not the case.  There were only 3 rows behind us.  We were so high up that I was dizzy for about half an hour.  It was scary.  I don't know where the cheaper seats were... outside maybe?  And the catwalks blocked the jumbo-trons.  So  really, we couldn't see a damn thing.  Oh well.  I think Jon Bon Jovi is hot and all, but with his hair short now he reminds me of an old friend and it kind of skeeves me out. 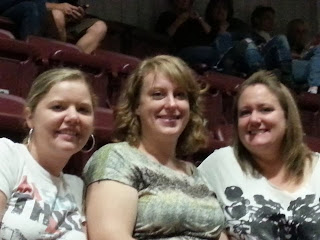 (my sister's friend, my little sister, and me)

All in all, the concert was really good.  About 1/3 of their old stuff, 1/3 stuff I have heard but wasn't familiar enough to sing along with, and 1/3 new stuff I didn't know at all or covers.  He did some Conway Twitty, Rolling Stones, other stuff.  Mostly fun stuff, though.  And he had an awesome Mick Jagger impression.  He had the moves like Jagger, for sure.  LOL  It was over 2 hours, so I think we definitely got our money's worth, even if they were little ants to us from up in the clouds... 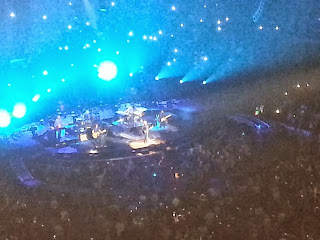 That's as zoomed in as my phone could go.

I had fun.  I might be willing to go to another concert in the near future....  if the right band came along.
Posted by Jennifer at 6:21 AM