If you are reading this, I have officially survived!

Before I get into all the details of the race itself, let's recap the past few months.

In October, I got this wild idea that I could walk a half-marathon.  I was inspired by  Katie, from Runs For Cookies.  She walked a half when she was starting out on her weight loss journey.  Now she's running full marathons and Ragnar relays.  On my list of fitness heroes, she's in the top 3.

I really didn't think I'd do it, but when I looked at the training schedule and realized that I needed to start right then, I thought "why not just start the training and register later?"  So I did.  I honestly didn't expect myself to make it to the half-marathon... I never finish anything.  19 weeks of training?  Yeah, whatever.  I actually didn't register until late December, just barely squeaking in before they sold out.

I weighed 253 lbs when I started.  I had walked 5Ks, but nothing more.  It's not like I started this thing in any great shape, OK.  I just want that to be clear.

With my and my husband's schedule and our 3 kids, doing the weekday walks was going to be very difficult.  I didn't have an hour or so of free time until it got dark, and well, even then someone should be in the house while the kids sleep.  So, the majority of my weekday walks (which were 2-4 miles) were accomplished with Leslie Sansone Walk-at-Home videos.  I did spend January doing Turbo Jam, but when I went back to WAH videos in February, my pace definitely improved.  I did my long walks on Sundays, when my husband could be home with the kids.

My first 4 mile walk was no big deal.  My first 6 mile was HARD.  I remember being about 5 miles in and thinking "Am I really thinking of doing more than twice this distance?  I'm in misery!".  Then I did something to irritate my peroneal tendon and limped for 3 days.  I really thought I was done right then.

But I got back out there the next Sunday and 6 miles was easy.  And I learned how important stretching was.

My first 8 miler wasn't bad, but the second one.... wasn't 8 miles.  About 3 miles in, my peroneal tendon acted up again and I limped 3 miles back to the van.  I had skipped the previous week's long walk and most of my weekday workouts.  That's how I learned to stick with the plan.  And that's when I think it finally clicked that I was going to do this no matter what.  If I can limp 3 miles and still get back out there the next weekend, there wasn't going to be anything that would stop me.

I started out being so, so sore for a few days after my long walks, to not feeling the least bit sore after walking 12 miles a few weeks ago.  I had walks that left me sick as a dog afterwards because I didn't fuel properly and my blood sugar plummeted.  Every increase in mileage meant adjusting how I did things, not to mention breaking down this mental barrier that kept telling me I'd never be able to walk 10 miles, I'll never finish 12 miles.  I managed to break it down every time, though.  I never quit.

I always quit.  You have no idea how amazed at myself that I trudged through 19 weeks of training, overcoming issues that most people would easily accept as a good reason to quit, and yet - I never quit.

During the course of my training, I dropped about 15 lbs, but I'm still nowhere close to being a model of fitness (yet).  I'm saying that because I hear all the time "I would die if I walked a half-marathon!"  No.  No, you wouldn't.  You might wish for it, especially if you don't train, but you won't die.  If *I* can do it, there is no reason you can't do it.  I don't care if you're in a wheelchair.  There's an option for that when you register.  Not an excuse.  If you have no desire to, that's a valid excuse, but saying you can't is not.

So, let's get to the exciting part!

The butterflies in my belly went into full swing Friday morning when I woke up and realized it was the day to pick up my race packet.  It was cold outside and Zoe looked like someone beat her in the face because she has a sinus infection, but we trudged over there anyway.  Maybe taking Zoe was poor judgement, but she feels fine.  She just looks frightening, poor thing.

We had to navigate the Health Expo going on to get to the packet pick-up area.  My first heart attack occurred when looking up my bib number on the wall and not realizing I had moved over to the 10K list, couldn't find my name.  Dear Lord, don't tell me I did all that and wasn't actually registered!  Which wouldn't make sense considering I got my confirmation ticket to pick up my packet.  I finally realized that I was in the wrong spot, scooted over, and found my name.  Whew!  I got my tshirt, my bib, and my timing chip.

Yeah.  A timing chip.  I'm feeling all like an athlete now. We browsed around and I picked up a 13.1 sticker because, yes, I do intend to advertise.   I actually had to resist buying multiple stickers.  One for my van, one for the truck, one for my notebook, one to paste on my forehead....  I controlled myself, though.  I got a pair of socks, though, with 13.1 on the cuff.  I almost got this shirt: But didn't think it would fit over my boobs.  Just to be honest.  Boobs will always be an issue for me, no matter how much I lose.  I had boobs in 3rd grade.  C'est la vie.

When I checked out, the guy said "Are you running the half?"  I told him that I was actually going to walk it.  He gave me a wink and said "No, you're not going to walk it, you're going to strut it."  Yeah, I will.  Until the final miles when I'll be resembling more of a zombie, but for most of it, I'm sure I will strut.

I woke up at 5am (on a Sunday... ugh!), ate a big breakfast somehow, and got dressed.  Grabbed 3 Larabars, chapstick, and my phone and was off!

It was 25 degrees when I got there.  TWENTY FIVE.  The coldest it's ever been for race day here in Little Rock, and most likely the coldest morning of this winter, period.  How lucky for me.  I tried my best to stay warm, but by the time I got into the corral, I could barely feel my feet.  It took 20 minutes to actually get to the start line once the race started, but once we got moving, my feet thawed out pretty quickly.

I guess my Cardio Trainer on my phone is off or something, because it said I walked 14 miles to the finish.  It's a certified course, so I'm sure it must have been 13.1 like it should be.  I didn't really fuss with my phone too much.  I missed my music, but the rules said no earphones but I was one of the few who followed the rule.  There was water and Gatorade every 2 miles, along with bathrooms (which I managed to not have to use).  The Gatorade made my tummy feel icky, so I stuck with water most of the time.  I ate a Larabar about mile 6, and didn't feel the need for another until the Finish Line.

I was really pleased with myself, no real aches or pains, no blisters, no mental struggle to get that last 1.1 mile in that I hadn't done in training.  No limping, no feeling like my legs were going to just fall off.

I crossed the finish at 3 hours 28 minutes (unofficially, that's the time on my phone). 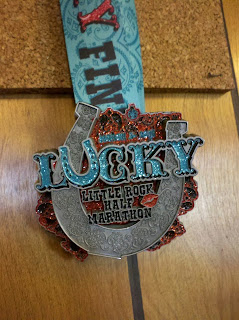 It's big.  And heavy.  =)  The full marathon medals were epic.  8 inches across, 8 lbs, and crystal studded.  Almost makes me want to eventually run a marathon.  Almost.
My sister and her husband met me as soon as I found my way out of the madness.  She had flowers for me =).  Then my kids tackled me and I got a kiss and a hug from my hubby.  My sister also had hummus for me.  I don't normally eat hummus, because I don't eat legumes or grain (in the pretzels), but I felt a treat was in order, for sure. 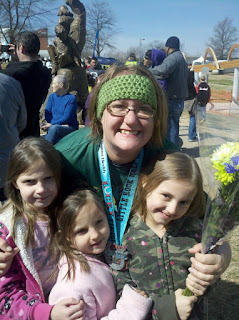 And that's that.  I made my way back to the truck and went home to shower and try to nap.  My fitbit says I walked a total of 17 miles including walks to and from the truck and wandering around trying not to freeze before the race.  Not bad.  =)


Here's the crazy part... for most of my training, I said "I am never, ever, ever doing anything like this again!"  And then I started planning on learning to run so that I can run next year's half.  What's even crazier?  My next half marathon isn't next year.  I found another half.  In October.  And I am still going to try to run it.  I might not be able to run 13.1 miles without walking, but I am going to give it my best.  Because I finally know it's in there, and am loving getting it out.  So, hello C25K, let's get this started!
Posted by Jennifer at 2:54 PM