I love sock monkeys.  I love sock monkey hats.  I've made a ton of them.  I sell two different versions of them in my Zibbet shop.  I bought a pattern for the first one and have modified it considerably to make it the way I like it.  Kind of like this, but it's evolved from here even: 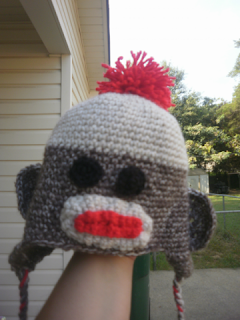 The mouth is different now... more sock-like.
I have made a few different variations on the whole idea, too.  One is super cute... 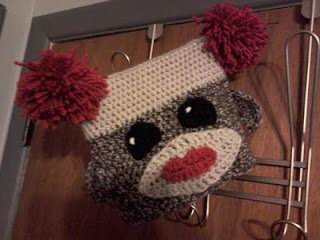 She's my Sassy Sock Monkey
And one is really creepy...  Can you imagine someone knocking over a liquor store in this? 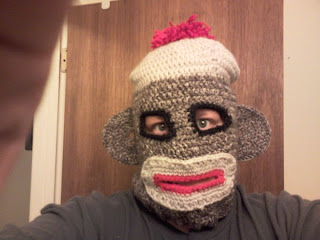 It was for my brother-in-law.  He doesn't knock over liquor stores.  That I know of, anyway.
And one was just kind of disturbing.  I was going to make several of them for our Mud Run team and wanted them to each be different.  I stopped after this one: 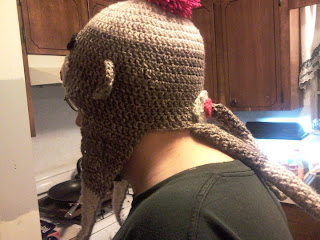 Yeah, it has legs and a tail.
I got kind of sick of making sock monkey hats for a while (any hats for that matter) but I saw a picture of a pirate sock monkey hat on Pinterest and I'm inspired again.  My cousin's twins are turning 5 next month and I think I'm going to make them sock monkey hats for their birthday.  A pirate and a punk rocker (mashing together my mohawk hat with a sock monkey... ).
I was also thinking about posting patterns for my hats.  The Sassy Sock Monkey is all mine, but the original is a super modified version of someone else's pattern.  How modified does it need to be for me to call it my own?  And I'm not sure if I want to actually sell them or if I should post them as free patterns.  I don't think I've ever seen a free sock monkey hat pattern (surely if I had I wouldn't have paid for one).  I guess I'll stew about it while I'm working on the Pirate and the Punk.
Posted by Jennifer at 2:32 PM